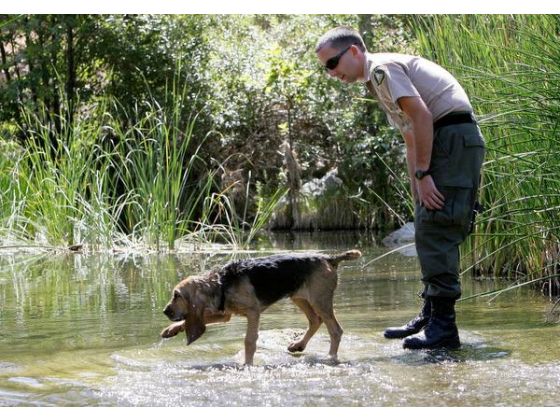 Windy the bloodhound is now on the job!

Riverside County sheriff’s Deputy Robert Ochoa works with Windy, a bloodhound, in June during her training to become a tracking dog. Windy is now certified to trail and track people in rural areas

BY DARRELL R. SANTSCHI / STAFF WRITER, The Press Enterprise,  Riverside County, CA – Windy, the Riverside County Sheriff’s Department’s newest bloodhound, has been certified for use as a tracking dog.

The 7-month-old dog completed her training at the Canine Training Academy in Colorado on Oct. 4, earning a certificate to trail and track people in rural areas.

Two days later she assisted deputies in tracking down a small amount of money in Coachella that had been taken in a robbery, according to a department news release.

She will continue training to track missing at-risk elderly people, criminal suspects and abducted and runaway youths in more difficult urban areas before she and her handler, Deputy Robert Ochoa, are tested in April by the National Police Bloodhound Association in New York state.

Windy was purchased in April with funds donated by the Betty R. Lockhart Living Trust after a 90-minute selection process among 11 puppies with “proven lineage of tracking capabilities,” according to sheriff’s Capt. Geoff Raya.

Her training began in June, including a crucial test early that month in which she was asked to cross the Santa Margarita River in a rugged canyon in the hills above Temecula.

Ochoa was concerned at first that the dog might be frightened by the swift-moving section of the river, but in the end she ran through the water and then plunged fearlessly into a pond along the riverbank.

Bloodhounds are used for tracking people and objects handled by people because their sense of smell is at least 100 times better than people’s sense of smell, Ochoa said earlier. Researchers estimate that a bloodhound’s nose has 230 million olfactory cells, or scent receptors, 40 times the number in humans, according to a report on the website of the television program “Nature.”

The Sheriff’s Department’s tracking dogs are based at its Cabazon station. Windy, who attracted considerable media attention when she was introduced at a news conference in June, was given her name for the prevailing weather condition experienced in the San Gorgonio Pass.

Posted by
Mark Young
Mark Young has not yet written their Bio.
Meanwhile we can say that he already contributed with 29 articles.
Mark Young has posted 29 articles
Previous articleJimmy Ryce Law: Should serial rapist go free? No decision after hearing
Next article Missing woman among 3 to vanish in MI this month