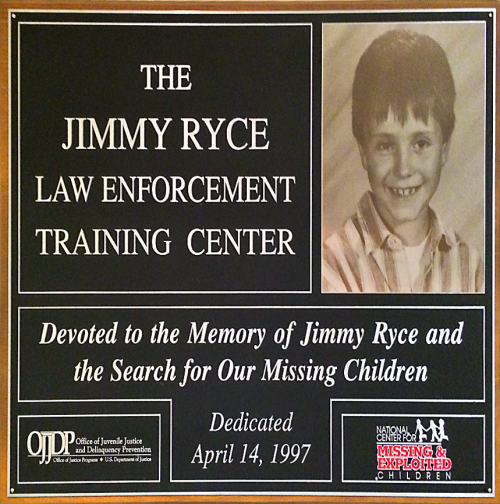 By Mark Young, Jimmy Ryce Center for Victims of Predatory Abduction Board Member, Sept. 25, 2015 – Today, Jimmy Ryce would have turned 30-years-old. A milestone birthday in the lives of young men and women. Unfortunately, Jimmy’s life came to a tragic end on September 11,1995,  two weeks shy of his 10th birthday. His parents never got to attend his high school graduation, college graduation. Being the loving child that he was they never danced at Jimmy’s  wedding or see him become the remarkable man he should have been.

Jimmy’s parents, Don and Claudine, vowed that their son’s death would not be meaningless and they put aside their pain and worked tirelessly to prevent a similar tragedy for happening to another child. All their work was behind the scenes.

After months of careful analysis, Don and Claudine started the Jimmy Ryce Center for Victims of Predatory Abduction. One of their strongest charges was to raise funds to obtain bloodhounds for law enforcement. When Jimmy was abducted getting of of his school bus, a bloodhound did not exist for law enforcement. The Ryces always have stated that if a bloodhound was available that fateful day, Jimmy could have been found.

In the past 20 years, the Jimmy Ryce Center has donated 500 bloodhounds to law enforcement agencies. These spectacular animals are the first defense in bringing children back, alive.

Today we were honored with a story written by the National Center for Missing and Exploited Children (NCMEC) which tells the world about Jimmy’s story and the legacy of his name:

Jimmy Elvis has three times found a special needs boy who ran away – twice tracking him into a swamp.  Jimmy Earle and Jimmy Cletus found a boy lost in a dense woods. Jimmy Amber found yet another boy lost in a wooded area.

These “Jimmys” are all hard-working police bloodhounds, named after a little boy whose spirit lives forever, protecting and rescuing missing children.

He was nine, and his name was Jimmy Ryce. He was abducted  on Sept. 11, 1995. (“God sleeps on September 11,” his late mother, Claudine Ryce, came to say.) We know from his killer’s confession that Jimmy had just gotten off a school bus less than a block from his home in Redland, Florida. A man jumped from a truck, pointed a gun and asked, “Do you want to die?” The man forced Jimmy into the truck and took him to a trailer. For four hours, he tortured Jimmy and raped him. When Jimmy broke away and tried to escape through the trailer door, his abductor shot him in the back. Three months later, Jimmy’s dismembered body was found hidden in concrete. His killer was eventually put to death, showing no remorse for his crime.

Posted by
Mark Young
Mark Young has not yet written their Bio.
Meanwhile we can say that he already contributed with 29 articles.
Mark Young has posted 29 articles
Previous articleSeptember 11 Marks the 20th Anniversary of the Death of Jimmy Ryce
Next article We Urgently Need Your Help!