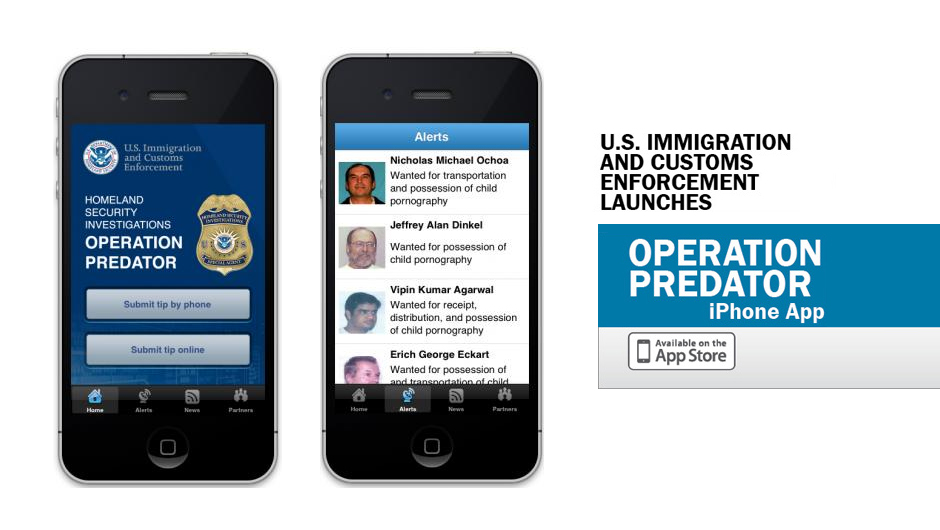 WASHINGTON — The first U.S. federal law enforcement app designed to seek the public’s help with fugitive and unknown suspected child predators is now available for Android smartphones, and in Spanish for both Apple and Android versions.

“This app is one piece of our commitment to ensuring child predators have absolutely nowhere to hide,” said Acting ICE Director Thomas Winkowski.

The Spanish language versions of the app are built-in to the iOS and Android applications and require no additional downloads. Users who already have the iOS version simply need to update the app or download it fresh from the Apple Store or iTunes.

• to receive alerts in their smartphones about wanted predators,
• to share the information with friends via email and social media tools,
• to provide information to HSI by calling or submitting an online tip, and
• to view news about arrests and prosecutions of child predators.

The app also provides additional resources about HSI and its global partners in the fight against child exploitation.
The iOS version of the app can be downloaded from Apple’s App Store and iTunes; the Android version is available on the Google Play store.

The first ICE app released in 2013 received honorable mention for “Best App” in PR News’ 2014 Social Media Icon Awards June 2 in New York City. It was one of eight award finalists. The iOS version of the Predator app has been downloaded more than 93,400 times since its initial launch in 2013.

HSI requests anyone with information about the fugitives profiled in the app to contact the agency in one of two ways, which can both be done through the app:

Operation Predator is an HSI-led, international initiative to protect children from sexual predators. Since the launch of Operation Predator in 2003, HSI has arrested more than 10,000 individuals for crimes against children, including producing and distributing online child pornography, traveling overseas for sex with minors, and sex trafficking children. In fiscal year 2013, more than 2,000 individuals were arrested by HSI special agents under this initiative.

HSI encourages the public to report suspected child predators and any suspicious activity through its toll-free Tip Line at 1-866-DHS-2-ICE or by completing its online tip form. Both are staffed around the clock by investigators. Suspected child sexual exploitation or missing children may be reported to the National Center for Missing & Exploited Children, an Operation Predator partner, via its toll-free 24-hour hotline, 1-800-THE-LOST.

U.S. Immigration and Customs Enforcement (ICE) is the largest investigative arm of the Department of Homeland Security. ICE is a 21st century law enforcement agency with broad responsibilities for a number of key homeland security priorities. For more information, visit: www.ICE.gov. To report suspicious activity, call 1-866-347-2423.

Posted by
Mark Young
Mark Young has not yet written their Bio.
Meanwhile we can say that he already contributed with 29 articles.
Mark Young has posted 29 articles
Previous articleMaricopa Arizona Search on for missing posse member
Next article Some Milestones Of The Jimmy Ryce Center!