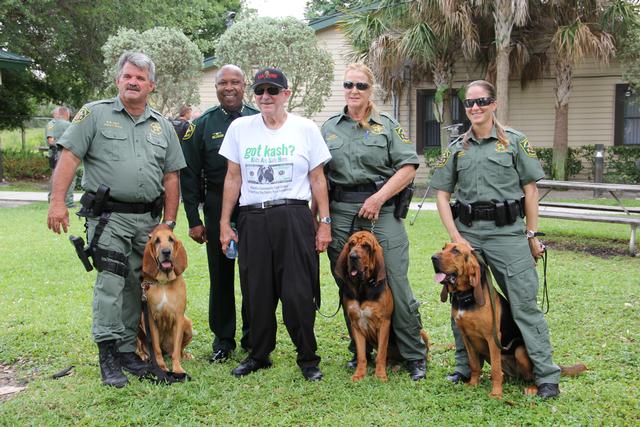 Broward County, FL (April 17, 2014) – After 15 intense weeks of learning to track humans, four bloodhounds graduated Thursday afternoon from the Palm Beach Sheriff’s Office K-9 Academy and are ready to report for duty at law enforcement agencies in Broward and Palm Beach counties. With one sniff of a personal item such as a pillow case or T-shirt, these friendly and gentle hounds can track special

needs or at-risk people who are missing. Whether it’s a child or an elderly person with dementia, the dogs can track people hours and days after they go missing, over varied terrains and long distances, tirelessly working until they reach their goal.

The four newly-graduated dogs were donated by the Jimmy Ryce Foundation and are from the same litter. The foundation was created by Don and Claudine Ryce, the parents of a 10-year-old boy who was abducted and murdered in 1995. The foundation, among other things, provides bloodhounds free to law enforcement to help find abducted and lost children.

“A bloodhound is your best single bet for bringing a child, abducted by a predator, home, alive. We believe that Jimmy would be alive today if a bloodhound had immediately been brought in to search for our son,” said Don and Claudine Ryce on their website www.jimmyryce.org/.

Two will work at the Broward Sheriff’s Office. Macie is assigned to Deputy Kelli Covet in BSO’s Cooper City district, and Wyatt is assigned to Deputy Debra Wallace in Oakland Park. KASH (Kids Are Safe Here) will work for the Palm Beach County School District, and Bandit will work for the Palm Beach County Sheriff’s Office. BSO Deputy Kevin Bolling, handler of Suzie, also graduated Thursday as an instructor.

“The work of the Jimmy Ryce Foundation benefits law enforcement agencies in such a powerful way,” Sheriff Scott Israel said. “I hope we never have another abducted child in Broward County, but if it happens, we are prepared thanks to this amazing family.”

Posted by
Mark Young
Mark Young has not yet written their Bio.
Meanwhile we can say that he already contributed with 29 articles.
Mark Young has posted 29 articles
Previous articleWhat Does The Jimmy Ryce Center Do?
Next article Claudine Ryce